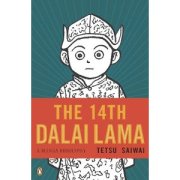 A while back, I reviewed another manga/ graphic novel about Je Tsongkhapa. I was excited to read one day on The Worst Horse about a manga that had been done about His Holiness the 14th Dalai Lama.

Manga is the Japanese word for comics. Summed up, mangas can come in a variety of forms. Whether it’s a serial comic, or like this book, done as a complete work, a graphic novel.

The artist behind “The 14th Dalai Lama: A Manga Biography” is none other than Tetsu Saiwai. With a body of work spanning 20 years, Tetsu’s main interests as far as topics for his mangas go are human rights and environmental issues.

Tetsu took his inspiration for the storyline from Scorsese’s “Kundun” and His Holiness’ book “Freedom In Exile.” If you’ve seen and or read the two titles, you will see where the similarities are. Heinrich Harrer, the main focus of the movie “Seven Years In Tibet”, makes an appearance in the manga as well. END_OF_DOCUMENT_TOKEN_TO_BE_REPLACED

Saying it hosts many individual Web sites considered politically sensitive by the Chinese government, the Go Daddy Group said Wednesday it would stop hosting new sites with “.cn” domain names, rather than comply with government requirements to provide increasingly detailed information about its Chinese customers.

END_OF_DOCUMENT_TOKEN_TO_BE_REPLACED 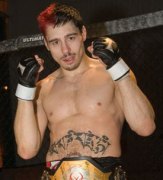 Ed. Note: I’m a bit disappointed with the UFC and Dana White on this one. I can understand he wants to grow the marketability of the UFC in China, but this is not the way. Message to Dana, censorship is not only stupid but is disrespectful to your fighters. And, to boot, it’s not anti-Chinese propaganda dummy, it’s a Buddhist mantra.

From Fightline
If you’ve been paying attention to the promotional material released for “UFC 111: St. Pierre Vs. Hardy”, you may have noticed that on some of the posters (not the one pictured here) Dan Hardy’s stomach seems somehow less cluttered than usual. That is because “The Outlaw”‘s prominent stomach tattoo has been erased using the magic of Photoshop. The fact that his ink was artificially removed is not breaking news, and for that matter neither is the reasoning behind it. But it is interesting.

END_OF_DOCUMENT_TOKEN_TO_BE_REPLACED

Last year around this time Tibetans decided to observe the traditional New Year — or Losar — as an occasion of mourning for those killed in China’s crackdown in 2008 following the Tibet uprising.

Appeals to forego Losar celebrations spread via text messages, blogs and word of mouth. On Losar, Tibetans stayed at home and ignored the fireworks, defying authorities who wanted them to sing and dance for state media. Overnight Tibetans turned silence — generally a sign of submission — into a weapon of resistance. The No Losar movement was nothing short of civil disobedience in full bloom.

On Feb. 14, Tibetans will again greet Losar with an air of defiance — many are planning not to celebrate while others will embrace cultural traditions as an act of subversive resistance. A couple of days later, U.S. President Obama will meet with His Holiness the Dalai Lama, sending a signal of hope to Tibetans everywhere. The 2008 Tibetan uprising may now seem a distant memory, but the dust of resistance is far from settled. With the new year, a different kind of storm brews over the Tibetan plateau.

END_OF_DOCUMENT_TOKEN_TO_BE_REPLACED

The article below this one mentions that Obama will not meet with his Holiness the Dalai Lama until he first talks with the Chinese. I’m not sure what he plans to talk to them about, but make it known that you do not agree with his administrations shun of His Holiness.

Students For A Free Tibet have set up an action page where you can send a fax to Obama’s office as well as your state office reps. CLICK HERE TO SEND THE LETTER! Please comment if you take action on this, I would appreciate knowing how many of you do so.

From The Wall Street Journal

The Obama Administration may think its decision to cold shoulder the Dalai Lama on the Tibetan leader’s upcoming trip to Washington is smart politics. But if the leader of the free world doesn’t stand up for religious freedom, who will?

The news broke earlier this week when an Obama aide told the Tibetans that the President wants to meet Chinese leaders before he meets the Dalai Lama. This is par for the course for an Administration that gave only lackluster support to Iran’s democrats and has made conciliatory overtures to Putin’s Russia and Kim Jong Il’s North Korea.

END_OF_DOCUMENT_TOKEN_TO_BE_REPLACED 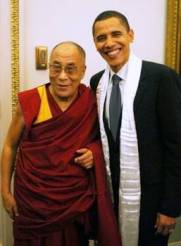 From Times Of India

Beijing is not going to be amused but the Obama administration has approached Tibetan spiritual leader Dalai Lama for a meeting with the US president when the Buddhist monk visits America between September-end and mid-October.

Highly placed government sources told TOI that the US administration has contacted Dalai Lama’s office for a meeting between the two leaders in what appears to be a considered decision, given China’s intense resentment of any official contact with the Dalai Lama whom it reviles as a “splittist”.

END_OF_DOCUMENT_TOKEN_TO_BE_REPLACED

Ed. Note: Was doing my usual morning news reading and found the following article. The article questions , like we’ve done here, the reasoning behind the international silence when it comes to Chinese violent repression of it’s people. Yeah you might hear a word or two from some world leaders saying how they think it is bad that this repression goes on, but never anything more harsh or confrontational. I agree wholeheartedly with the author of the article. We can’t bite the hand that feeds us all the cheap sh@t we sell in stores right?

In China’s worst ethnic unrest in years, Uighurs took to the streets of Urumqi, capital of Xinjiang, on Sunday. They are believed to have been angered by government handling of a June clash between Han Chinese and Uighur factory workers in southern China, where two Uighurs died, news agencies reported.

END_OF_DOCUMENT_TOKEN_TO_BE_REPLACED

In a speech that underscored the pressures he has had to bear during his life serving as both a spiritual and political leader, the Dalai Lama has said there is no need for his successor to perform the two roles.

In a video clip shown to hundreds of monks, nuns and lay people gathered in the mountain town of Dharamsala, the 73-year-old said it was essential that the Tibetan community in exile embraced democracy if it were to keep step with the wider world.

“The Dalai Lamas held temporal and spiritual leadership over the last 400 to 500 years. It may have been quite useful. But that period is over,” said the Nobel prize winner. “Today, it is clear to the whole world that democracy is the best system despite its minor negativities. That is why it is important that Tibetans also move with the larger world community.”