My son was watching a Youtube video this morning. The video was about Bert (Bernhard) Trautmann. I’m not gonna go into detail about him, you can click the link for the video or the linked article in his name. Though a brief synopsis would help I’m sure, especially for those that choose to skip the links.

Bert is well known for two reasons. The most recent being that he was a keeper for Manchester City. His greatest triumph with the team was playing a cup game in 1956 that he had stopped a shot and sustained an injury that should have kept him from continuing on with play but he brushed it off and finished. His neck was broken and shattered discs came dangerously close to killing him.

END_OF_DOCUMENT_TOKEN_TO_BE_REPLACED

Eight years ago I officially signed off from Precious Metal. It was bittersweet to put it lightly. I didn’t really want to walk away, I was really enjoying what the online sangha at the time was building. The universe had its own plan though and I walked away.

Here I am after nearly a decade and the landscape of the online sangha has changed dramatically. I can’t seem to find many of my old pals, but that’s ok; it’s all impermanent right? I’m about to get wordy so those that have hung on and want to play catch up here it goes; I will try to be as brief as possible. END_OF_DOCUMENT_TOKEN_TO_BE_REPLACED

In July of 2018, just a few months before one of the most significant events of my life (more on that in the next post), another was taking place. One thing my children’s mother and I had always told them was that when we bought a house, we would get them a dog. We had a couple cats and of course, they were loved. But my boys missed having a dog since our Isabella.

Isabella was a local rescue we had taken in when we saw the conditions she was living in. We had zero experience with her breed, Great Pyrenees. At that time, we loved the idea of having a large breed dog, so after looking at the paperwork for her previous owners (before the squalor she was living in) we had an idea her health was ok. We loved that girl and decided that we wanted to rescue another large breed dog, maybe even a Great Pyreness again. END_OF_DOCUMENT_TOKEN_TO_BE_REPLACED

One of the most vivid memories of my childhood was how our neighborhood had a bunch of tight-knit families. All of the parents got along and there was only a minimal amount of drama. Every neighborhood has it’s drama, but no-one is writing a script based on the stuff that went down on Juniper Lane.

As a gregarious cluster we shared lots of meals. Do you remember when eating at your friends house was a thing? You’d either have to run home or ask to use the landline phone to see if your mom was ok with it. One family in particular was very odd to most of us at the time, at least when it came to what they ate. We knew them as vegetarians! Ohh scary right? They had tofu regularly, ate lentil loaf instead of meatloaf. “Why,” we often asked ourselves. “Why would they do that,” we wondered. The food tasted so… ummm… weird and bland to our youthful and finite tastebuds. END_OF_DOCUMENT_TOKEN_TO_BE_REPLACED

I was going to come right of the gate with a run down of what I’ve been up to the past few years– 8 years to be exact. I don’t think I could do the past decade (nearly a decade) justice, nor would you want to absorb all of that at once. What I can tell you is that I am back once again.

The details of the past will trickle out in the upcoming posts, I’m sure. For now, let’s just say things went awry. I’ve spent the past two+ years putting the pieces back together and feel like I’m in a much better space now. As a matter of fact, I am doing really well. END_OF_DOCUMENT_TOKEN_TO_BE_REPLACED

After going back and forth with WordPress for some time, I was finally granted access back to my “old” blog. I’ve got a much more lengthy post coming but I wanted to just put out a HELLO message to my old friends and say I’m hoping to start blogging again. I think I’m ready and I’ve got quite a bit to share; I hope!

As you’ve probably  noticed, there is a severe lack of updates here on Precious Metal. 5 years into this blog, I’ve decided, it’s time to officially sign off and move on.

I’ve thoroughly enjoyed doing this blog, and most importantly interacting not only with the readers, but the rest of the Buddhist blogosphere. I’ve hit a point in my life, lately, and have decided the best thing to do, for me, is to close up shop. I am leaving the blog, and all the previous posts, up as an archive.

The past five years have been pivotal to my being the person I have become. Without this blog, and your help, I could not have gotten here. So, thank you for all the support and kind words throughout the years. Many of you know my e-mail address or are on my Facebook. I am happy to stay in contact, and am even happier to have known you in the past, present and future.

Thanks to everyone who has ever commented, guest posted, sent items for review, etc. I appreciate everything!

Over the past few months, I’ve come to terms with the unavoidable changes, as a matter of fact I have learned to embrace them. But, one major factor in my life, now, is striving for bigger shifts in attitude specifically.

I’ve always been the type of person the just allowed things to happen organically, to not buck against it and just be content with the inevitability of it all. I would happily just sit on my little raft, floating down the river of complacency expecting things to change, as they always do and just coping with what happened. I’ve learned, recently, that same sense of complacency was not getting me anywhere but the same place I started. Living this cyclical existence has not been enough for me. As I raise my fist in the air, revolting against the very idea that we should just “be” and let this life unfold, I also scream from the bowels of my gut that I refuse to sit on that raft any longer, as a matter of fact I am pushing that raft ashore and setting the damned thing ablaze!!

Life’s too short for that crap. There are so many moments that can be embraced, to make those changes, but we tend to believe those things are too hard or that we can’t accomplish the task so we don’t even bother to put in the effort. I emplore you to put that brain chatter to rest, to flip that raft over, and try. You’d be amazed at the things you can do and accomplish with even the least bit of effort. The only failure is not trying.

I’ve lived my life in the comfort of complacency for to long. If I have an idea, from here on out, I am doing it. If I want to do this, I am doing it. I am setting goals that I was scared of in the past. I refuse to sit idly by and let this life pass without making it meaningful. I resist the implication that we should just be happy with the way things are. To be honest, I am sick and tired of this idea that we should just let go, to somehow coexist in a manner that we have no control of. Pardon the language, but fuck that! Yes, there are things beyond our control, but there are many moments I can, and will, control.

I am the change I want.

I am the man in the mirror.

I will not sit by and let life pass me by!!! 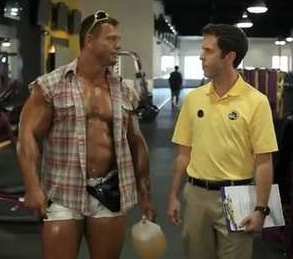 I’ve always had this perspective that folks that go to a gym were “meatheads”. You know, the “Lift things up and put them down” type? Or, that they were all gerbils running round and round on the treadmill, climbing the stairs that never actually go anywhere or were shuffling away on an elliptical without a destination in mind. While I can’t say 100% I was wrong, but I will admit, for the most part, I am dead wrong.

I’ve regularly been going to a gym. It was daunting at first, being all of 140lbs at 5′ 5″. A good cross section of the members dwarfed me in size, but I was/am there for one goal. I am looking to not only get my body in shape, so I feel better physically, but mentally as well. I would love to add a few pounds, maybe, just maybe not worry about what my skinny ass looks like when I go to the beach with my kids in the summer.

Considering some of the statistics on obesity in this country, I think a good section of the people should be awarded for getting their rear ends off the couch. I mean, what are we really projecting out there to the world? How do you want people to view you? Honestly, I don’t care what others think, I’m hard enough on myself, but that’s beside the point I’m trying to make here. The point is, my perspective is changing dramatically, as each day passes. I’ve been rather judgmental my whole life, and am trying to get past that.

I used to look at fit people as being fanatics, a different breed. The fact of the matter is, they are, they are a breed that actually give two shits about their health and are doing something about it. But, they are not only affecting and or inspiring themselves to push on, they are inspiring people like myself. The trickle down is that our children, I hope, see the way we are treating ourselves and might actually mimic that. I know my kids would rather stay home and play the Wii all day, but they need to remain active. What better way than to show them that path?

This past weekend I went to an expo and volunteered some time for the Spartan Race, who had set up a booth. Everyone was getting people into it, talking it up, etc. My boys were passing out info, talking up the fact they were signed up for the Jr Spartan Race, they also hit the deck and were doing burpees. You can easily google that! At the booth we threw out a challenge to those walking by to do as many burpees in 2 minutes and they would win a free race. Anyway… after the race the Street Team Director for the Spartan Race made my boys honorary members of the Street Team, and said they had inspired him to set up an exclusive Street Team just for Jr Spartan Race participants. This made my boys glow, smiles from ear to ear!! It’s the little things.

Maybe someday someone might call me a “gerbil” or “part of the machine”, I doubt they will call me a “meathead” at my size. But, I am ok with that. Because I feel good about myself, my body is no longer crying out for exercise, quite the opposite. It embraces the suck it goes through. It might complain the next day, but it, and I, love every minute of it. See you later, off to the gym now….