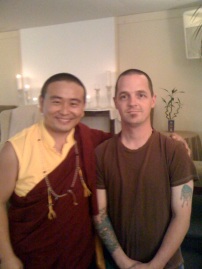 Today was a fantastic day. Hung out with my wife and kids in the morning, brought them over to play at the park then headed over to Hyannis.

Got to the teaching a few minutes early, so dropped my cushion and watched the video that had started playing. It was a bit of a background on Lama Tulku, and the work he is involved with today. Such as the YTDR Foundation which manages several charitable groups.

I was psyched to see my bro Pete walk in, he wasn’t sure whether or not he’d make it but there he was. Pete and I used to sit together in a small dharma group we founded, things fell apart after a while with the group and our schedules, so it fell by the wayside for now. On a side note, maybe it come back some day…

Lama Tulku was introduced by the folks hosting him and he came in to take the reins and speak. The first thing that struck me about him was the smiles, this guy does not stop smiling, and it lit up the room. Seriously, the atmosphere in the room changed as soon as he smiled.

His talk had alot to do about two main points in Tibetan Buddhism– Karma and Rebirth. He spoke about the kindness of our mothers, the sacrifice throughout their lives for us. He made a couple of lighthearted comments, like say you called your mom and were crying, she’d cry. If you called and were laughing, she’d laugh and then ask what she was laughing about. Our mother’s are always there for us. The first things they may say when we call, “hi, how are you, did you eat?”

Of course he said not all mother’s are like that, there are the few that give no thought to improperly raising their children. As if they are an accessory and not a child needing love and compassion. BUT, notice it’s a big but, if you are a son or daughter of a mother like that, you should still be grateful. You are alive! She gave you the gift of this human birth, thank her!

When he got to rebirth one thing he stuck out for me is the way he defined lower rebirths. He did not say the lower rebirths are any less important than a human birth, but pointed out the specific reasons why they are lower. For instance, to be born a deer you would live a life of fear. Always fearing a hunter or a predator, while crossing the road fearing a car or truck. The deer lives in constant fear. Even a domestic dog lives in fear. Yes it is taken care of but consider this. Bo, the Obama’s dog, has the best protection ever, the FBI, CIA, etc. As soon as Bo hears a loud noise though, thunder, something falling or whatever, the fear sets in. He is not protected from the fear, and cannot rationalize it. Thus, fear and the inability to understand it is partly what makes an animal birth a lower birth.

There was of course a ton more to the talk. I learned a lot from Lama Tulku today and am very grateful that we here on Cape Cod were given the opportunity to learn from him.

It was great to see my bro Pete, thanks for taken the photo of Lama and I buddy!