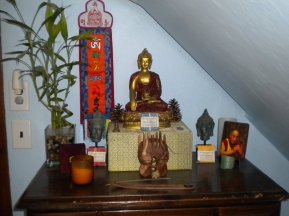 Do you have one? If so, what does it look like?

A while back on The Worst Horse, Rod asked readers to share photos of their home altar’s. It’s been a while since that post, and I know that my altar has changed a bit. So, if you posted yours over there, has it changed? If you didn’t post over there, what does yours look like?

Send a pic to natedemontigny@gmail.com and I’ll post it up!

Danny Fisher’s altar from his office at UWest

John from Notes In Samsara 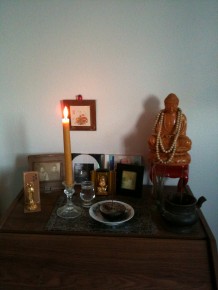 Richard from My Buddha Is Pink… “The photo on the right is of me from second grade, It is there to remind me that I am subject to aging, disease and death, that any notion of self is transient and always changing.

The photo on the left is of my Uncle Bill, who was killed during WWII in China. It reminds me of two things. One, that I will die someday. But it’s also there because I feel this very close Karmic relationship with this uncle, whom I’ve never met. The details are crazy, or would sound crazy to someone if I shared them. Hence I’ve never discussed them.

The item behind the Buddha statue is a newspaper article with the letter my uncle’s buddy wrote to my grandmother telling her about how he died.” 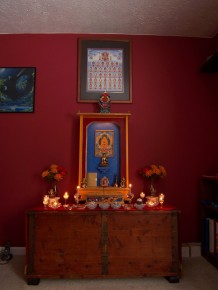 Philip from Digging The Dharma

Submission from Jamie Guinn, “I have my Buddha, an incense bowl, candle and holder, cup for water offering, rock from the garden, Four Bodhisattvas (Avalokiteshvara, Manjushri, Samantabhadra, and Ksitigarbha), a copy of the Heart Sutra in Chinese, and photos of major Zen figures down to my lineage… Rinzai… (Bodhidharma, Huineng, Rinzai, Hakuin, Joshu Sasaki, and my teacher Nick Ushin Lowry).”