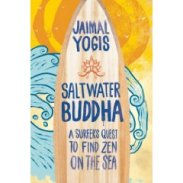 Ed. Note- At the end of this book review please check out the interview I was able to do with Jaimal. I had a good time with it and thank him for taking time out to do it for Precious Metal!

More and more we’re seeing books published that parallel one’s lifestyle with the teachings of the Buddha. Jaimal’s life as a surfer and Zen practitioner meld together as if they were meant to go hand in hand. It’s not just the surfing and the Zen, his life in general parallels someone we all know, Buddha.

While a youngster, like Buddha, Jaimal became dissatisfied and went on a search to find something larger than himself. When faced with adversity and thoughts of potential failure, rather than give in he overcame the obstacles. In certain cases, he excelled right past them, focused and aware of his intentions.

Saltwater Buddha is a quick read, or better yet, pulls you right in like a rip current. Rather than fighting the current though, this ride is enjoyable and it’s hard to put the book down. I think I read it in 3 sittings.

Maybe I’m blind, but what I really enjoyed was the fact there wasn’t a major hype behind Jaimal and this. He has no “famous” Buddhist teacher parents, and like I said, unless I’m blind, I didn’t even know who he was. I did see a short trailer on YouTube via The Worst Horse pumping the book up a bit, but that was about it.

You don’t have to be a surfer, which I am not, to understand where Jaimal is coming from. His writing style breaks it all down and speaks in such a way that I felt like I could get on the board and know what to do, but I don’t and know better so I’ll stay away. What I’m saying though is, he makes you believe you can truly do anything you put your mind too. And when you fall down, it’s ok to get back up and move on, to not give up and try again.

The book is honest and authentic and I appreciate Jaimal writing a book like this. I look forward to reading more him and to going back to Saltwater Buddha when I need a little extra inspiration.

PM: “Saltwater Buddha” has been getting some rave reviews, including one from this meager blog. I’m sure you’re somewhat used to it with the articles you’ve written and the praise they’ve received. Does the feeling differ at all with this being your first book?

JAIMAL: Definitely. A book feels very different from a magazine article. I come from a family where books are sacred and are literally thought to have kind of a life of their own. News media was always discussed a bit disparagingly, so, even though I won some journalism awards, having a physical book that I can hold and flip through the pages and sign and smell – and then receiving praise for it – feels like it goes beyond any of the journalism stuff. And even more so because I wrote this book totally from my own experience, rather than after tons of interviews and research, and I was scared to make myself that vulnerable. I decided to go for it though and the fact that it’s working out seems like a testament to the good things that can happen when you face your fears. It’s like a good dream and I keep wondering if I’m going to wake up.

PM: You entwine your life as a surfer and that of a Zen practitioner seamlessly. The two lifestyles seem so different, but your life/ water analogies make perfect sense. When do you think those two lifestyles really melded together for you?

JAIMAL: Really young.  I remember doing my first meditation with my family around age three and that was also around the age I was learning to body surf with my dad in the Azores, the islands off the coast of Portugal where my dad was stationed in the Air Force. But it’s true, in many ways, looking for ferocious waves to ride and living in a serene Zen monastery couldn’t seem more different on the surface.  But if you take up surfing as a way of life and a tool for connecting with something greater – be it nature or your “Buddha nature”, which I would argue aren’t actually any different  – they’re exactly the same. Anything for that matter, when done with awareness, can become a Zen practice. But as far as the seamlessness, because I grew up with stories about Zen and surfing they integrated into my life and into each other totally naturally and I never really thought about that much until I wrote the book. And in a lot of ways that was the coolest part about writing the book for me: it helped me explain to myself what exactly I believe and practice.

PM: In the book you talk about when your dad comes to the island to “get you” and the experience you had together while on the island. Has this changed the relationship you two have now?

JAIMAL: Yea, running away changed our relationship forever in a good way. My dad never told me that he had run away on a river boat when he was 16 until he came to get me in Hawaii. Talking about that and just hanging out with him in Hawaii – our first real father son trip just the two of us – all of a sudden I saw that we weren’t that different. And that has carried through to the present.

PM: Whatever happened to the metal Buddha statue from Japan?

JAIMAL: Good question. I wish I still had it, but I think I left it on an island on one trip or another. Maybe that’s where it wants to be (having come from and island originally). That Buddha is a rambler. It served me well. I’m sure it’s being appreciated somewhere in the world.

PM: I think it’s great your book has come out now, it gives another fresh face for younger Dharma seekers. Since you spent time in Plum Village, and have travelled to other places, what do you think differs here in the US from Buddhist practices in other parts of the world?

JAIMAL: I haven’t actually traveled in many Buddhist countries, but I hope to change that soon. In the east, I’ve been in predominantly Hindu or Muslim areas so far. But in the west, I haven’t seen huge differences in the way Europeans, North Americans, and Latin Americans approach Dharma. It’s fairly new to all of us, which I think is a huge plus. We have the rare opportunity to be able to look at a whole belief system without having already been indoctrinated by it. We can be in “Beginner’s Mind” and take what is helpful to us rather than fall into the cultural guilt trip that so often accompanies organized religion.

PM: What shape do you see Buddhism in the US taking?

JAIMAL: Good question, but I have really no clue. I think the future of belief systems and philosophies is anyone’s guess right now.  I live in the San Francisco Bay Area, an area with a huge Buddhist culture and lots of Buddhist centers. There aren’t that many people who call themselves “Buddhist” but virtually everyone has been heavily influenced by the ideas of impermanence, interdependence, and the practice of mindfulness. I think that’s fantastic and I see it continuing to thrive, evolve, and integrate here. I like that it hasn’t become dogmatic too. I’m not so sure about the rest of the country but that’s just because I haven’t spent enough time in Buddhist centers around the country. I get the feeling people are very open to Buddhism and Buddhist ideas, increasingly so. I don’t think it matters much if people become Buddhist or not. Like the Dalai Lama says, it’s important that people practice kindness and I hope the openness to Buddhism is encouraging that. I do have people in all parts of the country write me about the book and they’re often not Buddhist, but they like the ideas. That’s really cool. I think the most important thing is that we are open-minded.

PM: I’m no surfer, so my knowledge is limited there. But, if you had to pick one spot you’d go to over and over again to catch a wave where would that be and why?

JAIMAL: I like the question, but I think I’ll have to pass. Don’t want to give my favorite spot any more publicity than it already has, but I will just say it’s in northern California. This is home. I love it here.

PM: To the novice surfer and seeker out there what advice would you give them based on the lessons life has taught you so far?

JAIMAL: Relax and be yourself. Life can go by really fast and unhappily when you’re trying to be something you’re not. I know that sounds weird from a Zen perspective where “the self” is thought of as an illusion. That’s true, but I also think that’s all the more reason to relax and accept it. Films are illusions too and they’re more enjoyable when you relax and go along for the ride. Have fun!