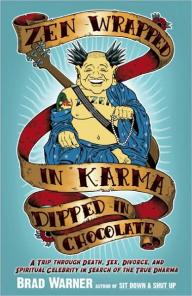 Ed. Note- At the end of this book review is a brief interview I was able to do with Brad over the past day or two via e-mail. As you may or may not know, he is a week deep into his book tour, so I thank him for taking the time to answer some of my banter…

Firstly let me say this, for those that don’t think this book was one that needed to be written, it did indeed need to be written and I’ll explain. In a world where we put “masters” and “teachers” on pedestals (or on mountaintops) and think they are infallible, this book dispels that myth. Brad Warner very much so is a “zen master” in today’s world, his dharma transmission is not only legit but is irrefutable.

Brad shatters the image we have of what we think a “zen master” should be like. His life is not unlike mine or yours, he breathes the same air we do, and deals with the same problems we all deal with, and this book details those things. I think the book is very relevant in the 21st century world of Buddhism and I recommend you give it some time to read through.

In “Zen Wrapped In…” Brad opens up to the readers and goes to great lengths to tell the story of his most recent past. He details the passing of his mother, his grandmother, the downfall and eventual end of his marriage as well as issues he has at work and more.

While telling these stories, Brad intertwines the lessons he learned along the way, and I think it could help many people as well who may be going through, or have gone through, the same things. One part of the book specifically had an impact on me. During the passing of his grandmother, his autistic nephew steps in to say goodbye. Not only did I feel the emotion that built up to this moment, but a few years ago my grandmother passed away. Although I thought I dealt with it pretty well back then, the feelings of loss came back. Instead of building up a wall to deal with it though, like I had done originally, I felt I could open a bit more and feel the pain without letting it overwhelm me.

Yes, Brad’s style of writing and teaching may be brash and over the top most of the time, but would you rather someone candy coat the truth or tell it like it is? I for one gain more from someone who is honest enough to not pull punches and can appreciate exactly what Brad is trying to do.

“Zen Wrapped In Karma…” may not be a manual on how to lead the”Buddhist” life but I belive 100% it is a manual on real life and how to cope with the bs that comes with life. Isn’t that part of the point in Buddhism, life is suffering? How do we attain an end to that suffering? I don’t know for certain, but I believe the way Brad has dealt with his stuff is a damned good start and worthy of relevance.

PM: First off, how is the book tour going? Is the book being received well?

BRAD: Pretty well. I’m only a week into it, though. So I may get lynched yet! The book seems to be selling pretty well.

PM: As Buddhism becomes more and more popular here in the US, we’re seeing alot of new teachers coming up through the ranks, yourself included. A few, if not most, of these teachers seem to fit into a Buddhist fringe, a more “alternative” style compared to traditional Buddhist teachers. Do you think it’s the dharma’s way of adapting as generations change?

BRAD: I don’t know. I don’t think there’s such a thing as a “normal person.” And Buddhist teachers aren’t any more normal than anyone else. The dharma always adapts. I think there’s a core that remains the same. But a lot of times what passes for “adaptation” is really watering down. It’s very difficult to see which is which. The reason some teachers seem to be “fringe” or “alternative” might be because you have to already be questioning the dominant society in order to be attracted to Buddhism in the first place. So Buddhist teachers aren’t coming from the so-called “mainstream” society anyway.

PM: I certainly can appreciate the way you write and teach, you’re honest, outspoken and don’t pull any punches at all. Again, this style is very different from what we saw in the 60’s and 70’s when Buddhism really started catching on here and seemed a bit more fluffy. How have people been reacting to your “style” and do they really get what you are trying to do?

BRAD: Some react better than others. But Zen has always been about challenging the norm and trying to break it down. The ancient Zen teachers all did this. But the things they said have now been accepted and become cliches. So a new generation has to subvert those cliches. This happens over and over. If the things I’ve said last 100 years (and I doubt they will) they’ll become cliche too and someone else will have to subvert them. Maybe they’ll be aggressively fluffy!

PM: What are your thoughts on the way pop-culture has been treating Buddhism? Do you thinks it’s consumer driven message cheapens the dharma or is it pertinent nowadays?

BRAD: There’s Zen and Dharma in everything these days. The consumer-driven pseudo-Buddhism that looks for quick thrills is no better than anything else that seeks quick thrills. But those fads die out quickly. All it takes is for a few people to go thru that stuff, realize it’s ridiculous and reject it. The sad thing is they may reject Buddhism totally because they’ve only been exposed to the crap stuff. The true message is always pertinent.

PM: You talk in your book about “Zeppo” and “Gummo”, two teachers you’re obviously not fond of and think in ways may be taking advantage of people. What would you tell someone who’s just coming to the dharma to look out for in a mentor/ teacher

BRAD: Zeppo and Gummo aren’t real people. I want to point that out first. They’re composite characters based on several real people. Some of those real people are trying to take advantage of others and some are not. Most Buddhist teachers aren’t trying to take advantage of anyone. The worst you could say of some of them is that maybe they’re a bit clueless. But there are others who are tremendous. Most of the teachers I’ve met are really good. The things to watch out for are always incredibly obvious. If someone is trying to take your power from you, watch out. If they want followers, that’s usually a sign of deep insecurity. Money is an issue. But keep in mind that everyone — including Buddhist teachers — has to pay their bills. So the mere fact that students pay for classes or retreats or whatever is not an issue. When the payments expected are excessive that’s a sign of trouble. Just have your bullshit detector up and running.

PM: As The dharma continues to grow and change, do you think “American” Buddhism will eventually become a meaningful version of the dharma? What do you think it will take for it to gain any sense of relevance?

BRAD: America and Europe are a new frontier for Buddhism. It’s a natural development. There really isn’t any such thing as American Buddhism. There’s Buddhism practiced by Americans. As it continues to attract people in the West it will become a major part of the culture. And the culture will change because of it. I don’t really know what that will be like. But I think it will be an improvement.

PM: Thanks a bunch for taking some time from your insane schedule Brad, I wish you the best in the rest of your travels. Any parting words of wisdom?

BRAD: None at all!