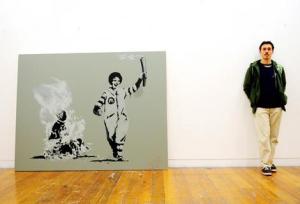 Van Thanh Rudd, who describes himself as an “artist activist” and lives in Melbourne, submitted the painting for next month’s Ho Chi Minh City exhibition, which will show the lives and work of 10 young artists in Vietnam.

Rudd, 35, son of Kevin Rudd’s brother Malcolm and a Vietnamese mother, Tuoi, was also invited, along with a Melbourne-based Vietnamese artist, to submit works. But Rudd’s painting, prepared especially for the exhibition, was judged to be unsuitable by the organisers.

City of Melbourne CEO Kathy Alexander told The Age the artwork did not fit in with the purpose of the arts grant program, which was to show the lives of young artists in Ho Chi Minh City. Legal assessment had also indicated it might infringe trademark and copyright provisions, she said.

Rudd was surprised to hear from The Age that the painting had been ruled out. He thought negotiations were to continue next Monday about it.

He said the monk in the painting, which is oil and acrylic on canvas, referred to the self-immolation of Buddhist monk Thich Quang Duc in 1963 in Saigon. The McDonald’s image was “commenting on the fact that I believe the global economy is a direct hurdle to a lot of the good peace processes to deal with human rights abuses”, including in Tibet. He said he did not discount China’s obvious atrocities. “But the overwhelming historical thing is going back to American colonialism in Asia and globally.”

Rudd would not be drawn into discussion of his prime-ministerial uncle, not even to say whether he voted for him. “I prefer not to comment on family issues,” he said. “I think the politics will speak for itself.” He does remark that he is “not as good at speaking as Uncle Kevin”.

He said he was “disappointed” at the decision about the painting. Ms Alexander said Rudd had been invited to propose another piece “which fits in with the themes of the international art exchange program”.

But Rudd said he had hoped he could persuade the organisers to include the original piece. “I was very sincere in my reasons for having it in the show – I believed it was the right painting for the show because it comments on contemporary society in Asia and Australia in the run-up to the Olympics.”

The City of Melbourne initiated the Young Artists Grants Program in Ho Chi Minh City in 2006. China and Tibet issues have been controversial subjects around the council. Last year, Lord Mayor John So would not meet the Dalai Lama and members of his council claimed he had tried to stop them as well.

Councillor Peter Clarke said last night he was concerned “at the Lord Mayor’s excessive censorship to stop any views that could embarrass China”.